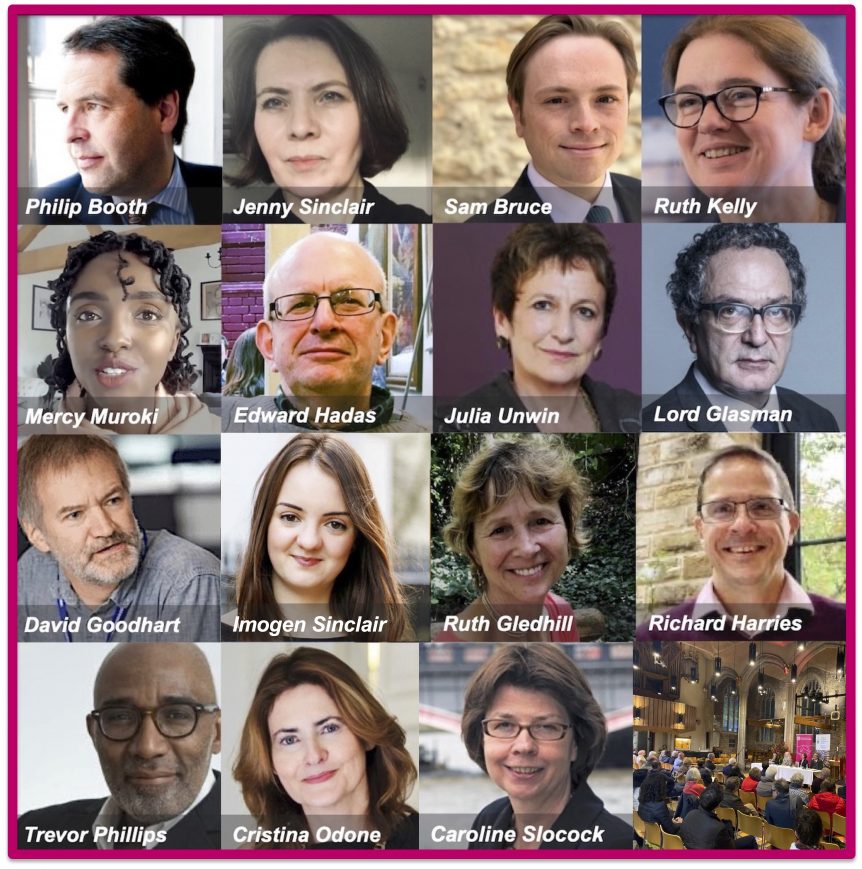 The Common Good: what does it mean for families, for society and for government?

A series of four public conversations

Politicians regularly say that they want to act for the common good. This is not surprising. After all, who could disagree? But, what does the term mean? And is it an agenda just for politicians? In this series of four events hosted jointly by Together for the Common Good, the Centre for Social Justice, Caritas Social Action Network, the Benedict XVI Centre for Religion and Society at St. Mary’s University, we explore the meaning of the common good, and the responsibility it places on families, society and the state. The series was supported by our longstanding partner, CCLA, one of the UK’s largest ethical fund managers, home of the new Catholic Investment Fund. The first three events were held online, and the fourth was held in person, at the Church of St Mary Putney, home of the historic 1647 Putney Debates.

The idea of the common good has been used within Catholic social teaching for many years. But, together with the related idea of “social justice”, it is often misunderstood as utopian or coercive. It is also misunderstood in utilitarian terms as an alternative to the “general welfare”. The common good in its true sense relates more to a settled pluralism of identities and interests, the shared life of a society to which everyone freely contributes and is able to flourish and reach fulfilment. At a time of great uncertainty, this event explored the meaning of this powerful concept and why it is important in our social and political discourse now. Against the backdrop of the complex challenges facing the country, the panel examined how the common good can be understood by people of all religions and none in the reweaving of a good and healthy society.

EVENT 2: The common good: what does it mean for the family? This took place on 13 July 2021. Video available below.

The focus of much of social and economic policy and rights-based rhetoric is the individual. However, we all grow up in and belong in families. That is so, even if families come in all shapes and sizes and are sometimes fragile and face immense challenges. But there is evidence that the focus on the individual can create conditions that weaken family life. It is the family in which we are formed, it is where we learn to share resources, reconcile collective goals with our unique individuality, grow up and then assist the older generation, returning the love and service we received as children. The family is the fundamental unit of socialisation and the foundation upon which the common good is built. Drawing on the first event and acting as a precursor to the two subsequent events in the series, our panel considered what needs to happen in civil society and public policy to create the conditions in which the family can fulfil its critical role.

EVENT 3: The common good: what does it mean for society? This took place on 29 Sept 2021. Video available below.

It is sometimes thought that responsibility for the common good falls only upon the state. In fact, the common good also depends on each individual, family and civil society institutions working in harmony, each taking responsibility at the appropriate level. At their best, associations, businesses, clubs, churches and other faith groups, charities and other local institutions all play a vital part in promoting the common good, enabling people to find fulfilment together. But modern liberal democracies are full of insoluble conflicts of interests between individuals and groups: the common good means we have to negotiate between sincerely held beliefs. This event looked at the capacity of our institutions, in the context of the Levelling Up agenda, to fulfil their responsibilities as we work together towards civic renewal. The hashtag was #commongoodinsociety

EVENT 4: The common good: what does it mean for government? This took place on 16 November 2021 at the Church of St Mary Putney, London. Video available below.

The appropriate role for government is contested – some argue for a strong, centralised state that guides the economy and explicitly supports civil society and the family. Meanwhile, others make the case for a decentralised model, rooted in the renewal of place, and in the revitalising of local and regional institutions. Others believe that only a more hands-off approach will allow civil society and the family the room, freedom and resources to flourish.

Held in-person at the church of St Mary’s Putney, home of the historic 1647 Putney Debates, our discussion was led by: