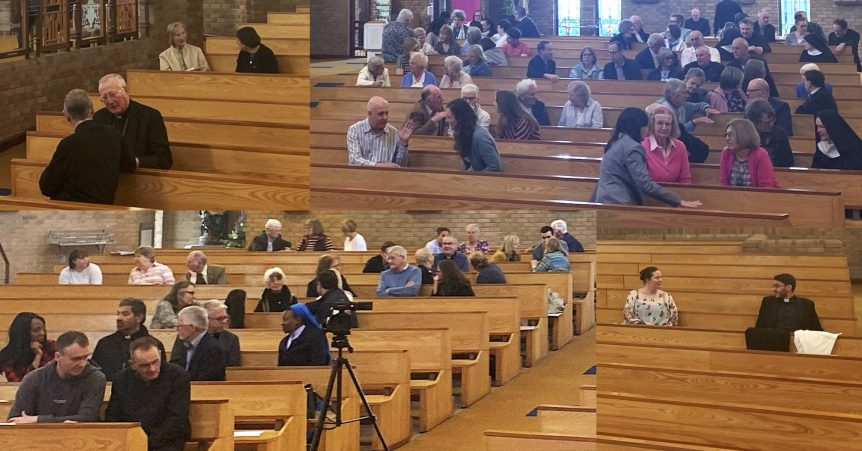 T4CG meets a diocese listening to the Spirit

On 21 May 2022, T4CG’s founder director, Jenny Sinclair, met with the clergy, laity and religious of the Diocese of Middlesbrough at St Mary’s Cathedral for a sixty minute session exploring synodality and its purpose for the Church.

As all the churches are going through a period of rapid change, Catholics all over the world are currently engaging with a process called ‘synodality’, meaning ‘walking together’. The intention is that the whole People of God are to listen to each other and to the Holy Spirit to inspire and re-energise the Church. For the first time in its history, the Church is inviting all 1.37 billion Catholics to take part in a two-year worldwide process of listening and discernment.

The aim of this “journeying together” is to bring Catholics closer to the mission of Jesus. In this synodal “way of being church”, the whole People of God should come closer together on the journey of bringing alive the Kingdom of God on Earth. It has been described as the largest and most ambitious listening exercise in the history of humanity.

But this is a cultural shift for the Church. Many Catholics have been nervous about the process. Many are used to traditional forms of worship, unaccustomed to listening to the Spirit. Then there are those fearful it will lead to changes in doctrine, while others fear there will be no change. Various lobby groups are exploiting the process to push particular agendas, while some see it as as an internal ecclesial exercise, and others dismiss it as a waste of time.

But I suggest that those sceptical voices are missing the point, and while so much of the Church is unfamiliar with the reality of the Holy Spirit, the opportunity will be lost. I believe that the confusion about the purpose of synodality becomes clear if understood within the wider context. By reading the political and cultural signs of the times – using the gift of Catholic social thought – we can understand that its fundamental purpose is nothing less than God’s way of preparing the Church to save the world, at a time when the world is in trouble. If it is regarded merely as an internal ecclesial exercise, or as a battleground between factions, then its vast potential will be lost, and the Church will continue to decline at a time when it is most needed.

After he had seen an article I wrote for The Tablet, A Synod for the World, Bishop Terry Drainey invited me to speak for the Middlesbrough Diocese Synod Day. In fact, the article he saw was drawn from an earlier essay I published on this site in the winter of 2021, A New Formation, for a New Era which had been written with all the Christian traditions in mind. I felt moved to write this following a long period of deep discernment along with others who listen closely to the Spirit. I am not alone in believing that God is doing something profound across all the churches.

Having learned a bit about the Middlesbrough story with their synodal team over the first few months of 2022 on zoom, it was a joy to be with them in person, and over a hundred and twenty clergy, laity and religious, for this special day. This day was a milestone marking the publication of the Middlesbrough Diocese synthesis document, capturing contributions from hundreds of spirit-led conversations across parishes and organisations. This was their first step in becoming a “synodal” church, fulfilling their grassroots contribution to the worldwide listening process.

The day was moving: people were highly engaged, conversations were animated and there was a clear determination and enthusiasm to move forward together, listening to the Spirit, carefully discerning practical steps. My session was early in the day, preceded by adoration, and followed by other important elements including music, reflection and group discussions.

Many people asked for the text of the session. I am hoping to turn it into a resource so that it may be of use to other dioceses and indeed other denominations. In the meantime I am sharing the session notes here. As you can see below, it was in three parts, following the see-judge-act framework.

You can download the text as a pdf HERE

A Synod for the World: Session Outline

Jenny Sinclair is founder director of Together for the Common Good

I would like to express my gratitude for the support of many colleagues who are advising on the synodality strand of T4CG’s work, in particular the Friday Group, and Edward Hadas and Phil McCarthy, without whose generosity of time and editorial expertise the work would not have been possible, and not least, our precious prayer partners who have prayed for this work.