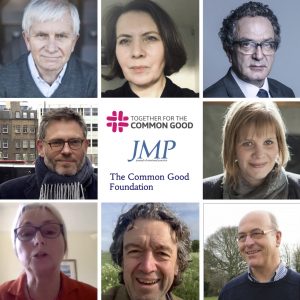 The Plague and the Parish

This is a letter to the churches from Together for the Common Good, The Common Good Foundation and Journal of Missional Practice. Here, we address the new era and invite the churches to consider their calling to play a critical role in civic renewal. Originally published on 29 May, 2020.

The Plague and the Parish: An Invitation to the Churches

Pope Francis said last year that we are not living through an era of change but a change of era. We are entering a new chapter in the history of the world, and of the church. In order to act effectively and faithfully it is good to understand what those changes are and how it is different to what went before.

These changes have been building for a while. In the era of globalisation, the previous chapter, it was assumed that borders and place would matter less and less as technology, knowledge, and trade dissolved restrictive barriers. Transferable skills were the key to success in the ‘knowledge economy’ and university degrees were the means to achieve social mobility. The future was for the educated and the working class were viewed as ‘left behind’ in the faraway towns by forces beyond their control. They were an evolutionary casualty in their inability to adapt to the changes that globalisation demanded. It was assumed that the future would be like the present only more so. Technology, mobility and transferability would intensify these changes indefinitely.

This would be underpinned by a legal framework that upheld the priority of individual and property rights. Place, democracy, tradition, faith, community and class did not really matter anymore. The internet, global corporations and new media would combine with frictionless trade in an increasingly integrated global economy to provide peace and prosperity that would benefit everyone. If in doubt, do another degree.

But it’s not turning out that way.

It turned out that democracy was not dead, that the abandoned people in the neglected places had something to say about how they were treated in the era of globalisation, something to say about loss, grief and rage. And their vote mattered more than people thought it would. And the most shocking thing of all, it turned out that it was conservatism and not liberalism that was shaping the future.

The coronavirus has intensified all of this. Nation states have a greater ability to act in combating it and workers are more visible and respected than they have been for decades. People find themselves stranded in the place they actually live in, longing for real physical presence and aware of their neighbours and the nature around them that renewed itself this spring. A time characterised by a greater awareness of vulnerability and our dependence on others for food, health and shelter.

INTIMATIONS OF THE NEW CHAPTER

This is a new chapter of an extremely long and ancient book. Earlier chapters give greater insight than the one that went just before regarding how to engage with these new realities. There are three plot dynamics that give life to this new era and bring to awareness different aspects of the vocation of the church.

The first is that what was once invisible becomes visible, what was devalued becomes important, what was desecrated is reconsecrated. One example of this is the respect shown to workers: to shelfstackers, bus drivers, carers, cleaners, truckers and farmers. They were of no importance in the previous chapter but they will be key characters in the new one. Another example is that the places denuded of value and purpose are revealed again as a site of meaning, a place where people live and from which they work. The parish has returned as a site of living community, with its land and nature, its character and history, its wounds and its promise. It is the elemental theatre of living community. Its institutions and buildings, including churches, are no longer abandoned monuments to inevitable decline but full of necessity and hope and the new chapter is played out within its bounds. People and place matter in this story. Their particularity is transcendent.

The second plot dynamic in this new chapter is that the church needs to recognise that it is vulnerable, that it shares the fate of abandonment with its neighbours in the parish, and can be written out of the story. It shares the need for mutual protection with others. It can be isolated and easily ignored. It can be merged and bought out. Its redemption is found in its friends and neighbours ‘of this parish’, who are also vulnerable and anxious. In relationship, it becomes stronger. In doing things together it brings meaning to locality, it rewrites its history.

The church needs those relationships because crunch time is coming. That precious mutuality, the recognition of neglected places and workers could count for nothing unless we build a constructive alternative that can resist the famine that will follow the plague.

Which brings us to the third part of this new chapter which is that politics matters again. Here, this is to be understood as a relational power that flows from being a faithful neighbour and the pursuit of the common good, that is by building a mutual space that can defy the earthly powers. Both the church and its neighbours are vulnerable to desecration. The state has coercive power and the market money power. But there is a relational power in a faithful neighbourhood which evokes a new politics.

This politics is not party politics, nor is it about national or even local government. It is not calling out enemies on Twitter. It is about the restoration, or the resurrection, of the body politic; the civic institutions that give substance and form to stable settlement and communities, that enable connections to be made between the parish and its neighbours. The body politic is embodied and embedded in place: schools, churches, local unions, businesses, business associations, tenants associations, farms, sports clubs, hospitals, fire stations, choirs and pubs. During the last forty years the body has been atrophied in favour of the mind, as profession replaced vocation, as the transferable was praised over the particular, money over work, and mobility over place.

AN INVITATION TO WRITE A NEW CHAPTER

These three plot dynamics are converging to create the possibility of a new chapter. This chapter will come through the renewal of the body politic which must redefine the meaning of society, and be pursued through the revival of the relationships that are not governed by power or money. It is a chapter that must address how we limit the damage to civic life by building up civic immune systems, an institutional ecology that will sustain belonging, place and meaning – all these human forms of association.

We must write this chapter because the body politic is emaciated. The church, which should be at the heart of this new chapter also finds itself reduced and in need of renewal. Vulnerability is pervasive. It defines the time of the virus. All are uneasy and unsure of where they fit into the new settlement, all are wrestling to understand the kingdom to come. Right now, virtually every aspect of the local economy is on life support.

Part of the unique vocation of the church as sign and foretaste of the kingdom is to participate in restoring the body politic, to revive the old bones so they can walk again. This is the task; the new chapter that is waiting to be written. The church must not enter this vulnerable space in order to seize power but to resist it, to hold capital and the state to account in their tendency to centralise and concentrate power, and to commodify human beings and the natural world. In writing this new chapter the church is called upon to uphold and defend fellow local institutions with whom it has built a relationship of trust – in defiance of capital recouping its losses and the state administering the debris. In moving from host to neighbour, in recognising its own vulnerability and those of others, the people of the church can take a lead in extending the hand of friendship and building the common good between previously isolated or estranged interests.

The civic calling of the church in the world is to preserve the sanctity of creation itself, which is human beings and nature, which can never be owned by the worldly powers and used at their discretion. The parish commune is that set of relationships that eludes their control – The Kingdom of God.

In joining with others to write this new chapter, the church fulfils its mission by acting in the world to ensure that God’s creation is not desecrated.

And, in a fallen world, to ensure that love is the end and goal of human society, that it is preserved in the actions of people in relationship, at home, at work and in community.

The preservation of love in faithful human relationships is the calling of the church as a civic institution. It passes on that inheritance to each generation and it is beyond price. It is its gift to all people. The beliefs and practices bring redemption, but the actions of the church in the world as a civic institution have the ability to disarm the inhumanity of capital and state through relationships – and this can only be done alongside other vulnerable institutions also in fear of capture and effacement. It is our gift to the world.

Listen to The Plague and the Parish on audio:

It comes out of an ongoing conversation between Together for the Common Good,, The Common Good Foundation and Journal of Missional Practice and is framed by a generous and generative partnership between us: Jenny Sinclair (T4CG), Lord Maurice Glasman (CGF), Alan Roxburgh, Martin Robinson, Sara Jane R. Walker and Mary Publicover (JMP), together with Rt Revd Andrew Rumsey and Fr William Taylor.

This letter is the third in a series. Download all three letters as a single pdf here or access each letter individually via the links below.

Preparing for a New Chapter: Revitalising the Christian Imagination for the Sake of the Common Good, a transAtlantic webinar on 30 April 2020 co-hosted by Alan Roxburgh (JMP) and Jenny Sinclair (T4CG), featuring Lord Glasman (CGF).

The Politics of Grace and Place, a letter published on 17 February 2021, addressing the political dimension of the local church’s vocation.

Your reflections will help to shape our work. Please write to: annette@togetherforthecommongood.co.uk