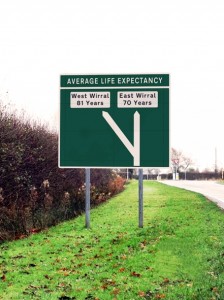 The Wirral peninsular is a beautiful yet, in some senses, divided area: there are pockets of great affluence alongside districts that are in the 20% most deprived nationally. The impetus for this project came when the Bishop of Birkenhead heard the statistics about the gap in life expectancy between East and West Wirral through a conversation with the Chief Executive and Leader of Wirral Council. Life expectancy for those on the Mersey side of the Wirral is 12 years less than those on the Dee side.

“When I heard about this inequality expressed in this difference [in life expectancy] I was shocked and convicted.  I went away and thought if the churches across the Wirral can’t do anything about this we should be shot.  I knew about the inequality, but something about this bare fact expressed the wrongness of what I seemed to be taking for granted.”  (Rt Revd Keith SInclair)

In response to this situation, the central aim of the project is to enable Christian communities to respond to the issues surrounding the unacceptable differentiation in life expectancy on the Wirral.Why?Because this is where Jesus would be. “I was hungry and you gave me food; I was thirsty and you gave me drink; I was sick and you visited me; I was in prison and you came to me.”

Life Expectancy Wirral (LEW) began in 2009.  The chosen method was to bring two groups together from different churches – one from a richer and one from a poorer area. The two groups were to be guided through a series of discussions in which issues of poverty and life expectancy would be examined. The process would encourage the groups to think about how they could engage with these issues. The project was planned around a five stage model, following a study, action and reflection process:

Stages one and two were undertaken by the groups separately over the course of three facilitated sessions. Stages three and four brought the groups together and stage five is ongoing. It was hoped that through the sessions each group would learn more about local deprivation, find out about each other’s areas and understand the Biblical imperative for engaging practically with the issues that surround poverty.

A pilot project brought together two Christian communities from either side of the Wirral to work in partnership: the Church of the Good Shepherd in Heswall, one of Wirral’s most affluent areas, and Christ Church Birkenhead, one of the most deprived.  Groups from both went through a preparatory phase of training, research and study, led by trained facilitators, and then came together to consider the issues of quality of life and life expectancy, identify appropriate responses to those issues and to work out how to implement those responses.

A successful and sustainable connection between the two groups was recognised as crucial in order to develop a creative relationship with mutual goals and a shared commitment to learning from each other. However, this was also understood to be a complex process with many potential pitfalls. Much thought, therefore, was put into the development of the relationship between the two groups, with a number of recommendations adopted to strengthen and maintain it. These included building ‘ownership’ of the project within the two groups’ wider churches and providing opportunities within the sessions to strengthen and share group identity through telling local and personal stories.

Building on the Pilot Phase

There were various practical outcomes from the pilot partnership including:

The project represents “the church doing what it is good at” – slowing down the process to have time to develop relationships.  Steps were taken to put people at their ease especially when the churches were brought together.  For example, the first joint meeting incorporated having a meal together. Having skilled facilitators and good resource materials was therefore critical to success.

Four more churches have since been paired and further changes to the process have been made in response to feedback from them and from people attending other events that have been held in 2010 and 2011. The team also visited a pairing programme managed by the Church of Scotland which provided valuable food for thought. As a result the pairings are now more relationship-focused: churches spend at least 12 months getting to know each other, visit each other’s church services and help each other out in small ways before taking part in the structured programme.

The project has underlined the need to change attitudes and overcome inaccurate preconceptions about people in poverty.  There was some problem in getting wealthier churches to participate and to some extent this is ongoing.

Partnering with other Sectors

Partnerships with other organisations, particularly the NHS on the Wirral have been invaluable to the development of the work. For example the NHS has provided help with research, evaluation and preparation of presentations. The event held in 2012 was hosted jointly by Life Expectancy Wirral and Wirral Public Health and had the specific aim of bringing together the faith, voluntary and statutory sectors to address assumptions/preconceptions each may have about the other, to build relationships between the sectors and to look at how we can work together to reduce the gap in life expectancy on the Wirral.

In response to comments made at events and to national and local research, LEW sought funding in 2012 from Wirral NHS to explore the feasibility of a community led initiative to enable those living in poverty to increase their use of urban and non-urban green space. It has been shown that spending time in green space can:

Physical and mental health issues are more prevalent amongst those living in poverty. Research from Liverpool John Moores University identified that the poorest are more likely to benefit in health terms from access to green space and yet they are the lowest users. This led to a report which made several recommendations as to what ‘next steps’ should be. LEW submitted a successful funding bid to the Public Health Innovation Fund in 2013 to respond to this report.

LEW has been developing the core roles and purposes as follows:

The 2013 event on Saturday 9th February to which all churches on Wirral were invited was designed to raise awareness in churches about the extent of poverty on the Wirral and the effects of benefit changes.  It is hoped that as a result more churches and individuals will get involved in tackling issues affecting life expectancy on the Wirral, for example, by volunteering with existing organisations, by praying for the work or by whole church involvement in social action.

Click here for videos relating to this case study: http://www.chester.anglican.org/page_csr.asp?Page=336