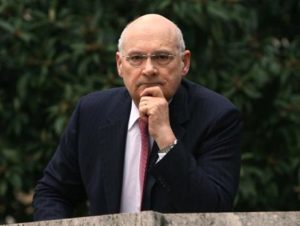 This article was first published on ABC Religion and Ethics in 2013 and is reproduced by kind permission of the author.

Pope Benedict insisted that neither the liberal-individualist nor the state-centred vision of the world is a safe guide to lead us out of the shallows in which our societies have run aground.

There are those who believe that, after the economic crisis of the last few years, it is the global market itself that will recreate a proper sense of social obligation and rebuild human relationships, so they want business efficiency to be encouraged through our social, political and cultural life. In contrast to this post-Fordist ideology based first on economics, Christians believe that the human dimension is all important, as is the right of each individual to realise his or her potential and aspirations.

This latter conviction was underlined by Pope Benedict XVI in his great third encyclical, Caritas in Veritate. But it is important to note that this document did not, as some might have wished, reject the market, or the social role of private enterprises, profit, finance and so on. Rather, the encyclical rightly held that everyone can help make the rules and build the institutions, select the aims and decide the priorities by which the economy is governed.

If in the teachings of the Church there is critical reference to the dominant market model of development, this is not because its potential and benefits are not acknowledged, but because such potential is too often exploited to create inequalities rather than to enhance solidarity; to increase what is superfluous rather than to redistribute necessities. The message sent by Benedict XVI to economists was that the renowned thesis that the free market is self-legitimising and therefore not subject to moral constraints must be re-examined.

The key issue is this: that the market is the place where the coordination of economic decisions is carried out through voluntary cooperation. And this is fundamentally because, as Milton Friedman put it in Capitalism and Freedom, “both parties in an economic transaction benefit from it, provided that the transaction is bilaterally voluntary and informed.” As a result, when two (or more) parties, with no trick or coercion, who are therefore free to make their own choices, originate an economic transaction, they also agree to any consequences.

This is the ethical justification, in economics, of consequentialism. The concept of consent based on freedom of choice is well explained by Richard Posner in The Economics of Justice, when he writes: “I personally believe that he who buys a lottery ticket and loses, agrees to the loss if there was no fraud or coercion.” So choosing freely means giving one’s informed consent.

The market doesn’t need to ask for a certificate of ethical legitimacy, because it is capable of legitimising itself on its own. On the other hand, this is not the case for the state which needs the approval of the electorate in order to be able to use coercion, which is the main way it attains its goals.

But there is a weakness in this reasoning. In practice, it is almost never true that freedom of choice also implies consent. The mother or father, for example, who voluntarily offers, under no obligation of any kind, to sell one of his or her organs to alleviate the poverty of his or her family, certainly does not agree to the consequences of his act.

These ideas are first found in the social contract theories of Hobbes. The idea is that if I signed a contract with you to do something I now no longer want to do, your answer could be, “But you agreed to do it at the time, now you have to abide by the terms of the contract.” In other words, consent generates obligation. Among those who embrace the social contract theory, no one more decisively than John Rawls showed that in order for consent to produce obligation, the constraints under which those involved in the contract take their decisions must be shared by everyone. Only if it can be proved that the parties to the social contract agreed (or intended to agree) to the rules of the game they are in, can it be legitimately claimed that the agreement reached through consent implies obligation.

Of course, it is evident that in our market economies this condition is never fulfilled in practice. True freedom of choice depends on the absence of coercion by others. There has to be the possibility of choice. But this still says nothing about the ability to choose – in other words, the genuine exercise of the choice. Having a large number of possible choices is not enough to make any of them genuine if you don’t know how to choose, or if you don’t have the resources to translate the possibility of choice into the capability of promoting your own goals.

This is the great lesson taught by Benedict XVI, when he reminds us that the use of freedom is somehow essential to its definition. Someone who is free to put into practice his or her action plan, but who does not possess the capacity to do it, cannot really be said to agree to the consequences of his or her actions. If the market is not capable of finding in itself the basis on which to construct its own justification, the reference to ethics becomes fundamental.

In his encyclical, Benedict’s ideas move from the way in which giving and receiving gifts – what he calls gratuitousness – reflects God’s nature and how it helps builds communities, to the importance of the concept of gift in wider society.

Civil society, said the Pope, is the most natural setting in which to express gratuitousness, but that gratuitousness is also needed in the operations of the state and the market. The great merit of Caritas in Veritate is to find a place between these two polar opposites. Benedict XVI demonstrated persuasively that today it is wrong to think that any strengthening of the sense of belonging must be interpreted as a limitation of the independence of the individual; that any progress in efficiency is a threat to fairness; that any improvement of individual interest is a weakening of solidarity.

The idea of giving something freely is attacked both by today’s free marketeers and by the neo-statists, albeit with diametrically opposite intent. The free marketeers appeal to the maximum possible extension of the exercise of gift as donation to underpin the idea of “compassionate conservatism,” in order to grant a minimum level of social services to the poorest groups of the population who, with the dismantling of the welfare state that these conservatives advocate, would otherwise be left with no assistance whatsoever. This is not donation in the proper sense, as can be seen when we consider that attention to the needy must always focus on the person.

The attack by the neo-statist theory is not that different. Supposing that there is strong solidarity among the citizens to achieve their so-called citizenship rights, the state makes some types of behaviour compulsory. In so doing, however, it displaces the principle of gratuitousness, practically denying, within the public sphere, any scope for principles other than solidarity. Nonetheless, a society which glorifies gratuitousness in words, but then does not acknowledge its value in the most varied places of need, is a society that sooner or later will fall into contradiction. If we admit that the gift has a prophetic function – or, proverbially, that it “is more blessed to give than to receive” – but do not allow this to be manifest in the public sphere because everyone and everything is taken care of by the state, it is clear that the civic virtue par excellence, the spirit of gift, will slowly atrophy. Help which is exclusive to the state tends to produce people who are, indeed, assisted but who are not respected, who can fall into the trap of “dependency.”

Both schools of thought, as a matter of fact, consign gratuitousness to the private sphere, expelling it from the public sphere. Market ideology does this by claiming that welfare can be achieved by means of contracts, incentives and clearly established (and enforced) rules of the game. Neo-statism does this by maintaining that solidarity can be realised by the welfare state, which can, indeed, appeal to justice but certainly not to gratuitousness.

The challenge that Caritas in Veritate invites us to take up is to fight to bring the principle of gratuitousness back into the publicsphere. Genuine gratuitousness must find a way to express itself in every field of human action, including the economy where it is needed urgently.

The most common key word in Caritas in Veritate is “fraternity” (see especially Chapter III of the encyclical), a watchword of the French Revolution, but which the post-revolutionary order later abandoned so thoroughly that it was eventually erased from the vocabulary of politics and economics.

It was the Franciscan school of thought that gave this term the sense it has kept over time: that of complementing and at the same time transcending the principle of solidarity. In fact, where solidarity is the social organising principle that enables unequals to become equals, fraternity is the social organising principle that enables equals to be diverse. Fraternity enables people who are equals in dignity and with the same fundamental rights to express freely their life plan or their charism.

The past centuries – the nineteenth and especially the twentieth – were characterised by major cultural and political battles in the name of solidarity. The point is that a good society cannot content itself with the horizon of solidarity, because a society based only on solidarity would be one from which anyone would want to escape. The society in which the principle of fraternity is dissolved is not capable of a future – in other words, a society where there exists only “giving in order to get” or “giving out of duty” cannot progress.

What is it that suggests that the project to restore the common good to the public sphere – and to the economic sphere in particular – is something more than just a consolatory utopia? It is the ever-growing dissatisfaction with the way the principle of freedom is interpreted.

Freedom has three dimensions: autonomy, immunity and empowerment. Autonomy has to do with freedom of choice. Immunity has to do with the absence of coercion. It is, in brief, the negative freedom (that is to say the “freedom from”) cited by Isaiah Berlin. Empowerment, in the sense given to it by Amartya Sen, has to do with the capability to choose – that is to say to reach goals that are set, at least in part, by the person himself. One is not free if one is never (at least partially) able to fulfil one’s own life plan.

The liberal-free-market approach wants to secure autonomy and immunity at the expense of empowerment, while the state-centred approach, both in the version of the mixed economy and of market socialism, tends to value immunity and empowerment at the expense of autonomy. Free-market liberalism is of course capable of inspiring change, but not so capable of handling the negative consequences of costs and benefits. Costs are instant and they tend to fall on the weakest part of the population; benefits come later and they tend to go to the most talented.

Joseph Schumpeter was among the first to recognise that the heart of the capitalist system is the mechanism of creative destruction – which destroys “the old” to create “the new”. On the other hand, market socialism – in its multiple versions – does not refute the logic of the capitalist market; it simply narrows its area of action and influence. The purpose of the common good is the effort to hold the three dimensions of freedom together and that is why it is so worthwhile to explore.

Stefano Zamagni is professor of economics in the Department of Economics at the University of Bologna, Italy.