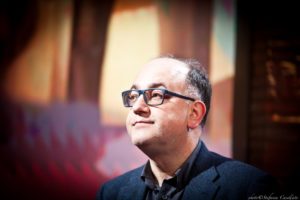 Faith and Trust (Piercing the Roof)

Here, Luigino Bruni takes us on an economic and social history of Europe to reveal the relational origins of the word fides, and in doing so, reveals the roots of our modern crises. In Latin the meaning of fides (faith and trust) is to bind, or link together.

There are some words that have the ability to express something in its entirety. Words like justice, beauty and truth possess a power and completeness that prevents us from surrounding them with adjectives to make them more complete. What else is there to add to a real person, a righteous human being or a beautiful life?

Faith is one of those few great and absolute types of words. You can live long, and sometimes even well, without money and goods, but you cannot live without believing. We are all capable of believing because inside each person there is a “window” looking at what is “beyond”, and a chink remains there even when we, looking inward, do not see anything anymore or wall it up to put shelves or a TV in its place. Because faith is a great word to describe what’s human.

It is also a word to use in the context of economics. The economic and social history of Europe is, above all, a story of faith. What beauty still remains is mainly in the works of art and architecture that were born of the faith of our ancestors. They were capable of creating great works because they were animated by faith to engage in things that were greater than their earthly existence. Europe’s great churches and abbeys have all blossomed from a faith that still inspires creativity in areas that save us.

These places are where we collect the fruits and seeds that others have sown for us in the past; from the windows of their souls and of their time, they knew how to see greater things. There are so many people today who can work or live well thanks to the many in the past who invested their wealth, thinking about the distant future that also would be inhabited by other human beings. Faith (not just religious) allowed them to feel as if these future others were their neighbours.

For this reason, too, faith is a bond (fides), connecting citizens and generations with each other: it is a tradition, which is the transmission of an alliance, a pact that lives through time and history; it is a gold thread, a covenant.

fidēs – Latin meanings:
– to bind, or link together
– faith, belief (belief without empirical evidence, direct experience, or observation)
– reliance (act of relying (on) or trusting)
– confidence, trust (confidence in or reliance on some person or quality)
– credit (acceptance of the truth of something said or done)
– loyalty, fidelity, faith (state of demonstrating undivided and constant support)
– good faith (good, honest intentions)
– honesty (act, quality, or condition of being honest)
– guarantee, promise (an assurance of something to be done)
– in his Civil Economy Lectures (1765), Antonio Genovesi translated fides/trust as a string for a musical instrument

What “grains” are we sowing today for future generations to harvest? Without fides, no elderly person would plant an acorn in the soil. Without fides the ceiling of your home or office becomes the horizon of the world, which is too low for the person who has been obsessed with the infinite since the beginning of time. It is not high enough for the person who, until the age of huts and nuraghes (ancient Sardinian edifices), felt the need to pierce the top of their shelter, not only for the smoke from the fire but also to make the sky the highest ceiling of their house.

In the absence of this profound vision that elevates us, we settle for the images from television’s virtual skies, which have neither the warmth of the sun, nor the depth of the horizon nor the feeling of breeze, which could only enter if we opened one of our house’s windows. The opposite of faith has always been idolatry, which is not the attitude of someone who does not believe in anything, but of those who believe in things that are fake and artificial.

But fides-faith was also essential for the emergence of markets. It provided the basis for large businesses, answering the main question of any market economy: why should I trust a stranger? At the dawn of our economy, when merchants were travelling from one city to another and met at fairs along the great rivers of Europe, legal systems, courts and penalties were very fragile, often non-existent. However, for complex, risky, long and costly business operations, a real act of trust was necessary to cooperate with the other party.

This was, then, the main guarantee that the other would do his part and send the goods: it was a guarantee offered by their shared faith. This way they could trust a person that they did not know because, after all, the other wasn’t really a stranger. He shared my faith (Christian), so I could trust him because he was faithful. So fides (faith and trust) made a greater community that was similar to the Greek polis of Pericles, and trading became a new form of philia (Greek for friendship).

Though it was like a polis, it was much more extensive and had many more markets, which multiplied the amount of goods and the number of business, social and religious meetings. Faith became trust, and trust generated markets and wealth. Europe was the result of this fides-trust-bond-belief-credit.

When this fides was broken up by the Protestant Reformation and later by the Catholic Counter-Reformation, capitalism was born, and, little by little, it invented a new fides embodied by central banks and finance. Europe was re-established by this cultural revolution, which was fully embodied by the USA and gave rise to a capitalism of the new “sola fide” (justification by faith alone). However, there are crucial differences between the first and second fides.

That first fides, for example, was a relational asset because – even though there were coins, securities and banks – Niccolò trusted Miguel, and the exchange took place thanks to the credit granted to a man of flesh and blood; it was an inherently fragile and vulnerable experience, possibly subject to abuse and, therefore, human.

The second, the invention of the new capitalist faith-religion no longer needed this kind of personal trust and relationship because the de-personalization of economic relations had already started, which has grown to literally explode in the latest crisis of our time. This system depends in large part on the financial system it has built, which is very distant from, and independent of, those human relationships of trust that actually generate economic goods. A capitalist bank’s response to a request for funding from a good enterprise in difficulty is entrusted, all too often and increasingly so, to an index that comes out of an algorithm, without any person “credit” and without a meeting between people – thus it becomes inhuman.

faith (n.) – origins: mid-13c., faith, feith, fei, fai “faithfulness to a trust or promise; loyalty to a person; honesty, truthfulness,” from Anglo-French and Old French feid, foi “faith, belief, trust, confidence; pledge” (11c.), from Latin fides “trust, faith, confidence, reliance, credence, belief,” from root of fidere “to trust.” From early 14c. as “assent of the mind to the truth of a statement for which there is incomplete evidence.” In Roman times, Fides was the goddess of trust.

The crisis we are going through is telling us that we have to meet and trust people despite their vulnerability; when the economy and finance lose contact with the face of the other, they become inhuman. If we do not seek out and restore the dimensions of fides today,, there will be no tricks or government that can truly save us.

But there is more than one fundamental link between faith and trust. Another essential dimension of faith is loyalty, as we are reminded of by the name of a wedding ring in various languages (fede – faith in Italian, Aliança – alliance in Portuguese and Catalan). Faith has a lot to do with loyalty because any real experience of faith is first and foremost a love story, the adherence to a pact – so it too is a virtue.

Faith is in full bloom when we remain faithful in the night of faith, when we are true to the bonds that connect us, when we remain confident about a meeting-alliance that now seems very distant and blurred, almost a comforting self-deception, or when the fog does not vanish outside out of the window that we don’t feel like ever opening again, and when we cannot remember the forms of the ancient landscape, turning instead to TV’s fake skies. Moreover, we find out that in those faithful nights we were faithful to what is most real and profound in us. You can be righteous and true even without faith, but never without loyalty.

Whoever lives this dimension of true faith is capable of true dialogue and true brotherhood with those who do not have faith, with those who have lost it or with those of other faiths. This type of person alone is capable of moving mountains because he does not move them for himself. It is this faith that allows humanity, the economy and enterprise to reach great heights where faith continues to generate extraordinary things.

Faithful people are always important for the Common Good and the beauty of the earth, but they are also essential for bringing us out of any crisis because they can show us a larger horizon. They can pierce the roofs of our houses, showing us the full sky and how to make a fresh start.

Luigino Bruni is an Italian economist and historian of economic thought, with interests in philosophy and theology. He is a prominent figure in the Economy of Communion, and professor of political economy at Maria Santissima Assunta Free University (LUMSA) after having held the role of associate professor at the University of Milan-Bicocca until 2012. Together with Stefano Zamagni , he is a promoter and co-founder of the School of Civil Economy and is a visiting professor at the Focolare Sophia University Institute in Loppiano.

This article was first published on September 15, 2013 and is part of ‘the virtues to be rediscovered and lived’ a collection of commentaries by Luigino Bruni, available via Avvenire Editorial.

Our free e-newsletter comes out every 6-8 weeks packed with commentary, resources and a unique helicopter view of Common Good activity across the churches